TAMPA, Fla. (WFLA) — Newly-released data from the U.S. Census Bureau shows a shift in population growth and decline across the United States in recent years – except for Florida.

While Delaware, Maine, New Hampshire and Rhode Island all went through what the Census calls “natural decrease” in all of their counties, Florida grew. And Florida didn’t just grow more than a few states. The Census reported more than two-thirds of the U.S. had population decreases in 2021.

“The patterns we’ve observed in domestic migration shifted in 2021,” said Dr. Christine Hartley, assistant division chief for estimates and projections in the Census Bureau’s Population Division. “Even though over time we’ve seen a higher number of counties with natural decrease and net international migration continuing to decline, in the past year, the contribution of domestic migration counteracted these trends so there were actually more counties growing than losing population.”

Of the 384 metropolitan statistical areas across all 50 states, and the District of Columbia, more than half had population decreases.

That included the Tampa metro and the Sarasota metro areas. According to the Census, “Tampa-St. Petersburg-Clearwater, FL (-9,291) and North Port-Sarasota-Bradenton, FL (-6,643)” had some of “the highest levels” of natural decrease, but the Tampa metro area also had one of the largest net domestic migration gains (42,089).

A natural decrease is the difference between the number of live births, i.e. babies born, compared to the number of deaths during the year. So, the Tampa and Sarasota birth rates were lower than the number of residents who died.

However, the Tampa area had a big increase in people moving in from out of the city or from across the country, contributing to the higher domestic migration.

While the Tampa area saw big migration, it wasn’t the only big population increase in Florida the Census took notice of. Polk County was ranked No. 7 in the top 10 counties across the country in numeric growth from July 1, 2020 to July 1, 2021.

While Polk County and the Tampa metro grew, Miami shrank. The Census reported the Miami-Dade County population lost 38,990 people from July to July. While not the most dramatic population loss, the decrease made the top 10 county declines in the U.S.

It was the only area in Florida to lose population at a high enough degree to warrant inclusion in the Census’ top 10. The rest of the ranking was in California, New York and Illinois. Still, Florida took home four of the top 10 metro areas for percent growth from 2020 to 2021, with the Lakeland-Winter Haven metro area taking No. 7.

Balancing the differences between migration and birth, the top 10 metro areas for numeric growth in the United States were more scattered across the map. That said, Florida still made the list, specifically the Tampa-St. Petersburg-Clearwater metropolitan area.

The overall numeric growth in Tampa was, like rankings for the Lakeland area’s percent growth and the larger Polk County’s numeric growth, measured at No. 7 for the whole United States.

Visualizing the growth across the U.S., the Census data showed Florida was largely a growth location, even taken county by county. Few areas in the state saw population losses. 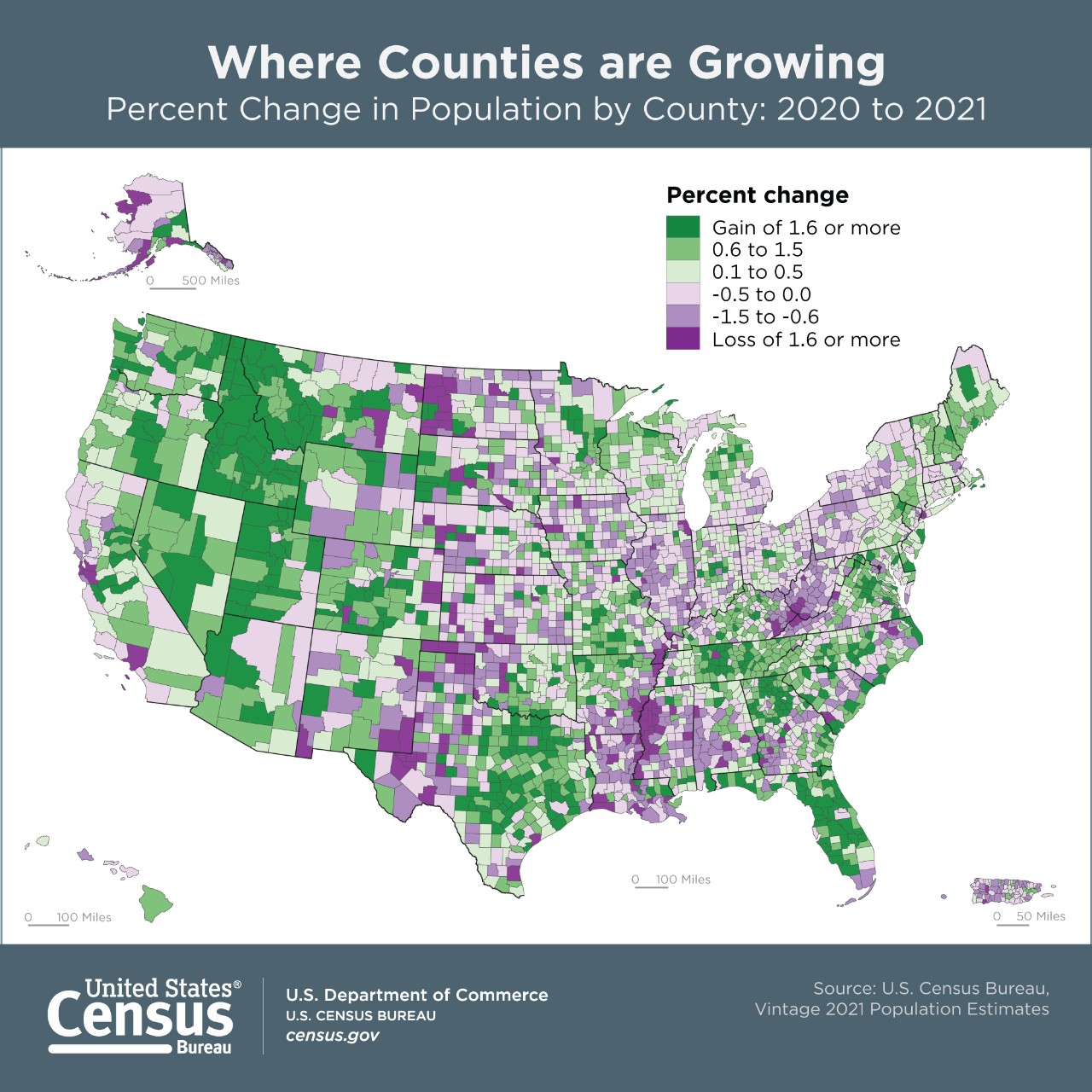 That population change is what contributed to the reapportionment of the country’s congressional seats. The shift in where people were living, from across the U.S. to Florida, provided enough of a boost in residents to net the Sunshine State an extra seat in the U.S. House of Representatives.

Now required to redraw the state’s political maps, Gov. Ron DeSantis has called the legislature to special session after Easter to try again, having rejected the previous redistricting map submitted to him. State lawmakers will return to Tallahassee, proverbial pens in hand, from April 19 to April 22 to settle the maps before this year’s November midterm elections.

Linebacker flattens protester who gets on field

Disturbance now has 80% chance of development

How to help victims of Hurricane Ian in Florida

Explainer: Why Fort Myers was flooded with storm …

Before and after shows hardest hit areas in FL