Did the Great White Shark Do It?

BOSTON, Nov. 4, 2022 /PRNewswire/ -- Jonathan Kaledin is a lawyer from New England who has decided to bring his career in environmental law—and his passion for defending often-misunderstood apex predators such as the great white shark—into his fictional detective book series. 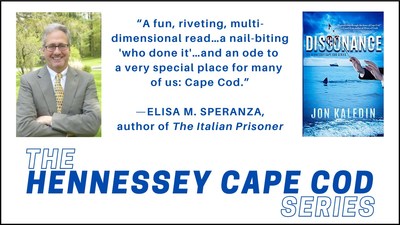 "I wrote it for the pleasure of murder mystery and legal thriller readers," Kaledin says of his debut novel, Dissonance, "and to make certain social commentary—about climate change, our misunderstanding of other species, the propensity for greed to dominate relationships in America, and flaws in our criminal justice system, including the sometimes horrible consequence of the felony murder rule." The felony murder rule has been receiving lots of press in Massachusetts ever since the state's high court struck down an existing murder law in 2017, leaving some serving sentences for crimes they did not directly commit.

Kaledin brings many of his personal experiences and passions into the novel, which is set on Cape Cod and follows Detective Tim Hennessey as he investigates a series of bizarre, gruesome murders that involve body parts showing up in great whites, which is a topic that has been on the minds of many on the Cape as shark activity in the area remains unusually high. In Kaledin's novel, the big question is: is the shark truly the murderer?

Hoping to dispel any anti-shark mongering still lingering from the effects of other popular media such as Jaws, Kaledin brings his years as an environmental lawyer and his stint as the Massachusetts General Counsel for Environmental Affairs to bear. As he explains in his recent article from LitHub's CrimeReads, "We have recklessly and inhumanely hunted many shark species to the verge of extinction."

Also apparent in Kaledin's novel is his love for the orchestra and classical music, which he weaves into the narrative in various ways. Kaledin himself is a classically trained cellist and has, at times, played in the Boston Philharmonic and Albany Symphony Orchestras.

If you would like to feature the novel or are interested in interviewing Jon Kaledin about his environmental work, love of music, and how he marries it all together (along with gruesome deaths) in Dissonance, please contact his publicity team at Mindbuck Media, jess@mindbuckmedia.com.