TAMPA, Fla. (WFLA) – Sen. Kamala Harris met face to face with Vice President Mike Pence at the University of Utah on Wednesday night for the first and only vice presidential debate of 2020.

The Commission on Presidential Debates then announced Thursday the next debate between President Donald Trump and former Vice President Joe Biden would be held virtually due to the president’s recent coronavirus diagnosis. The debate had initially been scheduled to happen in Miami next week.

Trump vowed not to participate in a virtual debate, calling the concept “ridiculous.” Biden later suggested the event be delayed, setting off a back-and-forth between the two campaigns.

It’s no doubt the debates draw in a lot of viewers. More than 73 million people tuned in to the first presidential debate between Trump and Pence. But what kind of impact, if any, do debates have on elections?

It turns out debates don’t have as much of an impact on election results as voters may think, research shows.

After surveying 172,000 people across the country in 2019, data from Harvard Business School shows that voters aren’t swayed by presidential debates.

“There’s this perception that debates are this great democratic tool where voters can find out what candidates stand for and how good they really are,” Vincent Pons with Harvard Business School said about the survey. “But we find that debates don’t have any effect on any group of voters.”

In a series of post-election surveys published by Pew Research Center, voters found debates useful but said they don’t make their decision based on the debates. 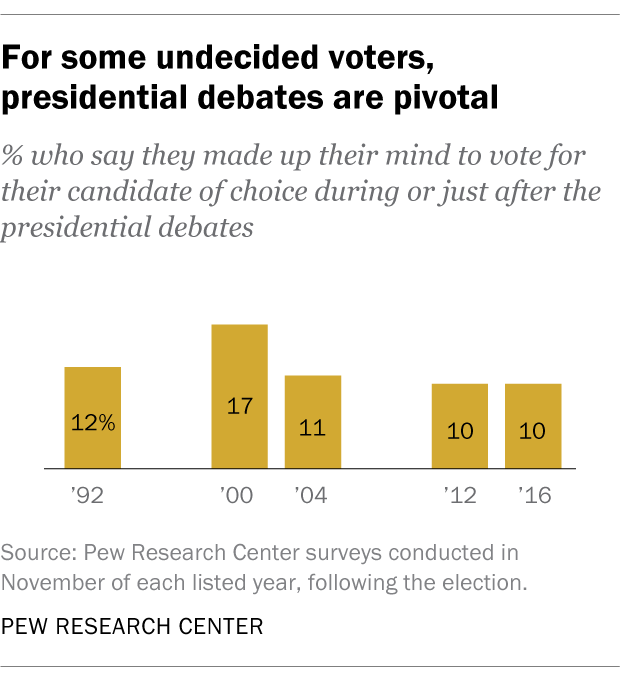 Trump Campaign Manager Bill Stepien said Thursday afternoon the president would be willing to move the debate to Oct. 29, while Biden’s campaign fired back saying “Trump’s erratic behavior does not allow him to rewrite the calendar and pick new dates of his choosing.”

So while it’s unclear what may happen on Oct. 15, when the next debate was initially scheduled to be held, it’s likely that it won’t have a major effect on many voters, most of whom likely already made their decision about who they’ll vote for in November.

LATEST FROM YOUR LOCAL ELECTION HEADQUARTERS:

ATLANTA (AP) — Georgia Gov. Brian Kemp drew protests Thursday as he signed into law a sweeping Republican-sponsored overhaul of state elections that includes new restrictions on voting by mail and greater legislative control over how elections are run.

Democrats and voting rights groups say the law will disproportionately disenfranchise voters of color. It is one of a wave of GOP-backed election bills introduced in states around the country after former President Donald Trump stoked false claims that fraud led to his 2020 election defeat.

It's the first defamation suit filed against a media outlet by the voting company, which was a target of misleading, false and bizarre claims spread by President Donald Trump and his allies in the aftermath of Trump's election loss to Joe Biden. Those claims helped spur on rioters who stormed the U.S. Capitol on Jan. 6 in a violent siege that left five people dead, including a police officer. The siege led to Trump's historic second impeachment.

Received a text message from Tom Brady? Unfortunately, you’re not the only one

Can you drink alcohol after getting the COVID-19 vaccine?