The Secret of the Holy Quran by Dr. Iftekhar Ahmed Shams 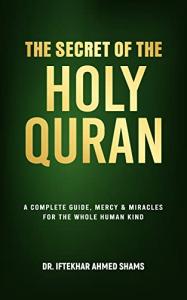 The Secret of the Holy Quran

This is the noble Quran, a complete guide, mercy, and miracles for humankind, irrespective of religion.

Allah (SWT) says in Quran: It is a noble Quran. In a well-protected Book. None can grasp it except the purified. A revelation from the Lord of the Worlds. (56:77-80)

Ayah is a word that signifies "sign" or "wonder." It means that every Ayah of the Holy Quran is a symbol of Allah's Majesty. And every Ayah is a miracle because no creature, whether humankind, jinn, or angels, can make it; it has 77,430 words.

Some benefits of the Holy Quran

One of the Quran's wonders is that no one has ever been able to change a single letter of its text, despite their best efforts; it’s because Allah (SWT) has said: Indeed, it is we who sent down the Qur'an, and indeed, we will be its guardian. (15:9)

This is the noble Quran, a complete guide, mercy, and miracles for humankind, irrespective of religion.

The writer has revealed The Secret of the Holy Quran through this book for those who can read Quran and those who cannot.

This book is available on both Amazon and Audible. The Bengali version of the book is already out, and the Urdu and Hindi versions are on their way.

About the Author: Dr. Iftekhar Ahmed Shams is an Author with 35 years of entrepreneurial skills as a Head in various fields. He has lived in the UK for over ten years.

The writer believes in the path of God and has written books on the proper way of Islam and about Life after death. Some of his books are (Life after Death series) - Life in Heaven, and Life in Hell.

History has recorded the names of many outstanding women of different ages and countries. Some gained fame for their remarkable beauty or occupation of a throne.

Khadija, daughter of Khuwailid, Fatimah, daughter of Muhammad, Ayesha Siddiqa daughter of Abu Bakr Siddique, Asiyah wife of Pharaoh & Mary, daughter of Imran - These women are the most virtuous women of the women of Paradise. Their influence on the lives of other people can still be felt. It tells how they became the most revered, loved, and fascinated women worldwide. They are role models for any woman to follow.

The author believes in a balanced life and thus penned down his dimension about life in "Being Unconditional " (11 steps to a perfectly balanced life). The author also wrote a book on Women: What the women want in their Soulmates.

Also, during this pandemic, where there is so much thirst for the job, the author has written a remarkable book on the job hunt, i.e., The “Insider” Secrets to Landing Your Dream Job in Tech.

Audible, the amazon company, has named some of his books as best sellers, i.e., The Secret of the Holy Quran, A complete guide, mercy, and miracles for the whole of humankind irrespective of religion, Angels - The Creatures of Light, Jinn -The Creatures of Fire.

The author continues to pursue his effort professionally and work with his next assignment to heighten his creative mind. All these books are available online on Amazon and Audible.

For any feedback, information, or any other queries: -

The Secret of the Holy Quran, book by Dr. Iftekhar Ahmed Shams